A young Indian girl at a militant training camp proclaims, “We have learned to use guns and we’ll use them if we have to. We will kill people if we need to”. Another young child, attending a camp called Durga Vahini for the first time, is seen wearing jeans, a rebellious attitude and a mischievous grin. After ten days at Durga Vahini, she is ready to kill for her country.

Durga Vahini is the female counterpart of the Bajrang Dal, a subsidiary of the Hindu nationalist organisation Vishwa Hindu Parishad (VHP). Canadian filmmaker Nisha Pahuja’s documentary The World Before Her chronicles the workings of Durga Vahini to stunning effect. Hers was the first film crew to be allowed inside the camp. Four years in the making and extensively researched, The World Before Her goes back and forth between a Durga Vahini camp and India’s fashion industry – two worlds that contrast, and surprisingly, even draw parallels at times. 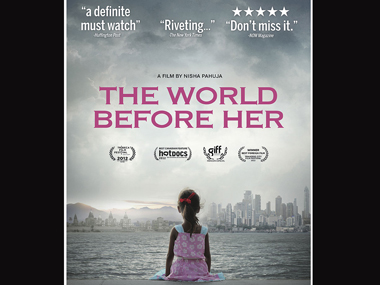 Pahuja’s film follows the lives of Prachi, a twenty-year-old trainer at Durga Vahini, and a number of Miss India (2011) contestants. It’s a classic ‘nationalist’ point of view versus the ‘Westernised’. Prachi has no qualms about killing Gandhi or people of other religions who attack Hinduism, and manages to terrorise even her fellow Durga Vahini members. Ultimately, however, Pahuja is able to create empathy for Prachi, who comes across as a victim of a long-standing social campaign to brainwash women for political mileage.

Pahuja, who divides her time between Mumbai and Toronto, eschews sensationalism in The World Before Her, making it a balanced, understated and powerful film. It won the award for Best Documentary at last year’s Tribeca Film Festival and Pahuja is currently in talks with distributors to release the film later this year in India.

How and when did you find out about Durga Vahini?

Nisha Pahuja: I found out about the Durga Vahini camps actually through Prachi. I met her in 2008 on my first research trip for this film. Just after five minutes of being around her, I knew I had found an exceptional documentary subject. She’s hugely charismatic – funny, strong-willed and intelligent. I remember there were a number of activists from the Bajrang Dal and Durga Vahini that I was meeting, and the men were definitely trying to dominate and steer the conversation, but she was simply irrepressible.

This is the first time cameras were allowed inside Durga Vahini. How long did it take you to convince the VHP/DV management to grant you permission to film them? What were their first reactions and what finally convinced them?

NP: It took nearly two years to get access. I realised early on after meeting Prachi that I would only be allowed in if people felt they could trust me. So I decided I needed to divide my time between India and Toronto, primarily to make inroads into the movement and to give people the time to get to know me. It got to the point where I was almost a normal fixture at Hindutva rallies!

I made it very clear to the organisation and the people I was meeting that I had real issues with their politics and their vision for the country. But I also emphasized that I had no intention of making a film that was sensationalist, demeaned them or judged them in any way. I simply wanted to present them as they see themselves and I wanted to try to understand them. After nearly two years of forging these relationships, they gave me permission.

Are you prepared for controversies and consequences of a theatrical release for The World Before Her in India?

NP: I don’t think the film is going to be particularly controversial. Elections are coming up and the RSS will try to avoid any kind of agitations. It is in their best interests to be non-reactive, especially as you point out, the film is not sensationalist. That said, yes, I am aware that there is potential for controversy, but I believe in the film. We’re coming up to one year since the Delhi Gang rape, and we have Narendra Modi poised to become an important force in National politics – that is terrifying to me. These are conversations that are important to continue. And the film was made with an intention to create a dialogue, not to further divide.

A lot of people ask me which of the two sides – the pageant world or the fundamentalists – did I prefer, and I have to say that in the end, I had more respect and affection for the Hindutva activists I filmed with. They were struggling with big ideas: right vs wrong, the direction India should take, what was their responsibility to the nation? They refused to embrace without questioning this new India where consumerism means modernity. I liked them immensely. I just wish they didn’t hate so strongly.

Have you showed the film to Prachi and her family? Has anyone from the VHP seen it? What was their reaction?

NP: Yes, the film was seen by Prachi and her family and they all really liked it. Prachi’s dad is somewhat nervous still about the VHP response, but he was relieved that it was balanced and did not sensationalise. Interestingly, they all really liked, Ruhi the Miss India contestant I focus on, and they really wanted her to win! At the point in the film when the stories touch on female infanticide, Prachi’s father cried. I had no idea he’d be that moved. That screening actually is what gave me hope. I felt perhaps the two sides could actually empathize with each other. Ruhi, the Miss India contestant had the same response – she found Prachi fascinating.

Which was the most disturbing discovery for you while filming?

NP: You know, more than the physical training the girls at the Durga Vahini camp are given, it’s the brainwashing and the blood curdling chants they are taught that shocked and depressed me. On the bus ride they take en route to their parade, they learned a few phrases that I simply refused to include in the film. Those were the sorts of moments that were hugely trying for me and my crew as well. We saw how easy it was to manipulate young minds. As filmmakers we needed to be objective and not react, but as people we were torn between affection for the leaders of the camp and our rage and sadness at what they were teaching these young girls.

How did you react to listening and recording to Prachi and her family’s warped views on religion and culture?

NP: There were definitely some heated discussions! It was hard to get past what to me, felt like their blind hatred toward Muslims and Christians. And there were certainly times when I was completely exasperated by Hemantji’s (Prachi’s father) assertions that Prachi had no rights other than what he gave her. But in the end, their prejudices made me realize one crucial thing: that all of us and our belief systems – whether they be democracy, fundamentalism, patriarchy – all of them, like us, are constructs, products of time, place, and numerous other things beyond our control. Once I realized how fundamentally similar I was to them it became a lot easier to put their prejudices into context. That is not meant as an apology for the hatred or violence they espouse, but for me it became very important to see them through a different lens and to be free from malice.

This interview first appeared on on FirstPost.com on May 29, 2014 here.

Sense of desperation in Sangh Parivar

“I speak here even after receiving death threats against my four...

In an India Where Minorities Are Singled Out for Abuse, Is...

ABOUT US
Hindutva Watch is an independent research initiative to monitor the reports of attacks on the members of minority and marginalised communities for their faith by the radicalised Hindus and the Hindutva militia groups in India.
Contact us: [email protected]
FOLLOW US
© Hindutva Watch